We describe the internal structure of boost::unordered_flat_map and provide theoretical analyses and benchmarking data to help readers gain insights into the key design elements behind this container's excellent performance. Interface and behavioral differences with the standard are also discussed.

The case for open addressing

We have previously discussed why closed addressing was chosen back in 2003 as the implicit layout for std::unordered_map. 20 years after, open addressing techniques have taken the lead in terms of performance, and the fastest hash containers in the market all rely on some variation of open addressing, even if that means that some deviations have to be introduced from the baseline interface of std::unordered_map.

The defining aspect of open addressing is that elements are stored directly within the bucket array (as opposed to closed addressing, where multiple elements can be held into the same bucket, usually by means of a linked list of nodes). In modern CPU architectures, this layout is extremely cache friendly:

The main technical challenge introduced by open addressing is what to do when elements are mapped into the same bucket, i.e. when a collision happens: in fact, all open-addressing variations are basically characterized by their collision management techniques. We can divide these techniques into two broad classes:

If we take it as an important consideration to stay reasonably close to the original behavior of std::unordered_map, relocating techniques pose the problem that insert may invalidate iterators to other elements (so, they work more like std::vector::insert).

On the other hand, non-relocating open addressing faces issues on deletion: lookup starts at the original hash → bucket position and then keeps probing till the element is found or probing terminates, which is signalled by the presence of a vacant bucket:

So, erasing an element can't just restore its holding bucket as vacant, since that would preclude lookup from reaching elements further down the probe sequence:

A common techique to deal with this problem is to label buckets previously containing an element with a tombstone marker: tombstones are good for inserting new elements but do not stop probing on lookup:

Note that the introduction of tombstones implies that the average lookup probe length of the container won't decrease on deletion —again, special measures can be taken to counter this.

SIMD technologies, such as SSE2 and Neon, provide advanced CPU instructions for parallel arithmetic and logical operations on groups of contiguous data values: for instance, SSE2 _mm_cmpeq_epi8 takes two packs of 16 bytes and compares them for equality pointwise, returning the result as another pack of bytes. Although SIMD was originally meant for acceleration of multimedia processing applications, the implementors of some unordered containers, notably Google's Abseil's Swiss tables and Meta's F14, realized they could leverage this technology to improve lookup times in hash tables.

The key idea is to maintain, in addition to the bucket array itself, a separate metadata array holding reduced hash values (usually one byte in size) obtained from the hash values of the elements stored in the corresponding buckets. When looking up for an element, SIMD can be used on a pack of contiguous reduced hash values to quickly discard non-matching buckets and move on to full comparison for matching positions. This technique effectively checks a moderate number of buckets (16 for Abseil, 14 for F14) in constant time. Another beneficial effect of this approach is that special bucket markers (vacant, tombstone, etc.) can be moved to the metadata array —otherwise, these markers would take up extra space in the bucket itself, or else some representation values of the elements would have to be restricted from user code and reserved for marking purposes.

boost::unordered_flat_map's bucket array is logically split into 2n groups of N = 15 buckets, and has a companion metadata array consisting of 2n 16-byte words. Hash mapping is done at the group level rather than on individual buckets: so, to insert an element with hash value h, the group at position h / 2W − n is selected and its first available bucket used (W is 64 or 32 depending on whether the CPU architecture is 64- or 32-bit, respectively); if the group is full, further groups are checked using a quadratic probing sequence.

hi holds information about the i-th bucket of the group:

When looking up within a group for an element with hash value h, SIMD operations, if available, are used to match the reduced value of h against the pack of values {h0, h1, ... , h14}. Locating an empty bucket for insertion is equivalent to matching for 0.

ofw is the so-called overflow byte: when inserting an element with hash value h, if the group is full then the (h mod 8)-th bit of ofw is set to 1 before moving to the next group in the probing sequence. Lookup probing can then terminate when the corresponding overflow bit is 0. Note that this procedure removes the need to use tombstones.

If neither SSE2 nor Neon is available on the target architecture, the logical organization of metadata stays the same, but information is mapped to two physical 64-bit words using bit interleaving as shown in the figure:

Bit interleaving allows for a reasonably fast implementation of matching operations in the absence of SIMD.

The maximum load factor of boost::unordered_flat_map is 0.875 and can't be changed by the user. As discussed previously, non-relocating open addressing has the problem that average probe length doesn't decrease on deletion when the erased elements are in mid-sequence: so, continously inserting and erasing elements without triggering a rehash will slowly degrade the container's performance; we call this phenomenon drifting. boost::unordered_flat_map introduces the following anti-drift mechanism: rehashing is controled by the container's maximum load, initially 0.875 times the size of the bucket array; when erasing an element whose associated overflow bit is not zero, the maximum load is decreased by one. Anti-drift guarantees that rehashing will be eventually triggered in a scenario of repeated insertions and deletions.

It is well known that open-addressing containers require that the hash function be of good quality, in the sense that close input values (for some natural notion of closeness) are mapped to distant hash values. In particular, a hash function is said to have the avalanching property if flipping a bit in the physical representation of the input changes all bits of the output value with probability 50%. Note that avalanching hash functions are extremely well behaved, and less stringent behaviors are generally good enough in most open-addressing scenarios.

Being a general-purpose container, boost::unordered_flat_map does not impose any condition on the user-provided hash function beyond what is required by the C++ standard for unordered associative containers. In order to cope with poor-quality hash functions (such as the identity for integral types), an automatic bit-mixing stage is added to hash values:

There's an opt-out mechanism available to end users so that avalanching hash functions can be marked as such and thus be used without post-mixing. In particular, the specializations of boost::hash for string types are marked as avalanching.

We have written a simulation program to calculate some statistical properties of boost::unordered_flat_map as compared with Abseil's absl::flat_hash_map, which is generally regarded as one of the fastest hash containers available. For the purposes of this analysis, the main design characteristics of absl::flat_hash_map are:

as functions of the load factor, with perfectly random input and without intervening deletions. Solid line is boost::unordered_flat_map, dashed line is absl::flat_hash_map. 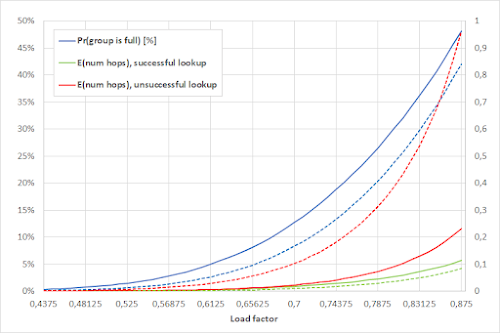 The next figure shows the average number of actual comparisons (i.e. when the reduced hash value matched) for successful and unsuccessful lookup. Again, solid line is boost::unordered_flat_map and dashed line is absl::flat_hash_map. 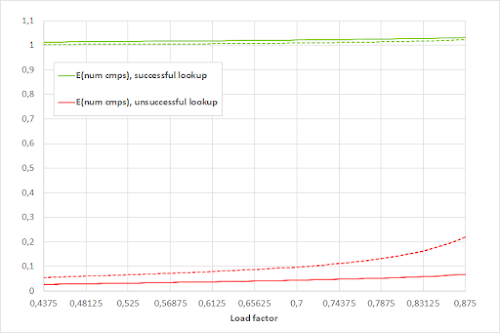 E(num cmps) is a function of:

We have measured the execution times of boost::unordered_flat_map against absl::flat_hash_map and boost::unordered_map for basic operations (insertion, erasure during iteration, successful lookup, unsuccessful lookup) with container size n ranging from 10,000 to 10M. We provide the full benchmark code and results for different 64- and 32-bit architectures in a dedicated repository; here, we just show the plots for GCC 11 in x64 mode on an AMD EPYC Rome 7302P @ 3.0GHz. Please note that each container uses its own default hash function, so a direct comparison of execution times may be slightly biased.


As predicted by our statistical analysis, boost::unordered_flat_map is considerably faster than absl::flat_hash_map for unsuccessful lookup because the average probe length and number of (negative) comparisons are much lower; this effect translates also to insertion, since insert needs to first check that the element is not present, so it internally performs an unsuccessful lookup. Note how performance is less impacted (stays flatter) when the load factor increases.

As for successful lookup, boost::unordered_flat_map is still faster, which may be due to its better cache locality, particularly for low load factors: in this situation, elements are clustered at the beginning portion of each group, while for absl::flat_hash_map they are uniformly distributed with more empty space in between.

boost::unordered_flat_map is slower than absl::flat_hash_map for runnning erasure (erasure of some elements during container traversal). The actual culprit here is iteration, which is particularly slow; this is a collateral effect of having SIMD operations work only on 16-aligned metadata words, while absl::flat_hash_map iteration looks ahead 16 metadata bytes beyond the current iterator position.

Boost.Unordered provides a series of benchmarks emulating real-life scenarios combining several operations for a number of hash containers and key types (std::string, std::string_view, std::uint32_t, std::uint64_t and a UUID class of size 16). The interested reader can build and run the benchmarks on her environment of choice; as an example, these are the results for GCC 11 in x64 mode on an Intel Xeon E5-2683 @ 2.10GHz:

Each container uses its own default hash function, except the entries labeled FNV-1a in std::string and std::string_view, which use the same implementation of Fowler–Noll–Vo hash, version 1a, and uuid, where all containers use the same user-provided function based on boost::hash_combine.

Deviations from the standard

The adoption of open addressing imposes a number of deviations from the C++ standard for unordered associative containers. Users should keep them in mind when migrating to boost::unordered_flat_map from boost::unordered_map (or from any other implementation of std::unordered_map):

Conclusions and next steps

With this work, we have reached an important milestone in the ongoing Development Plan for Boost.Unordered. After Boost 1.81, we will continue improving the functionality and performance of existing containers and will possibly augment the available container catalog to offer greater freedom of choice to Boost users. Your feedback on our current and future work is much welcome.